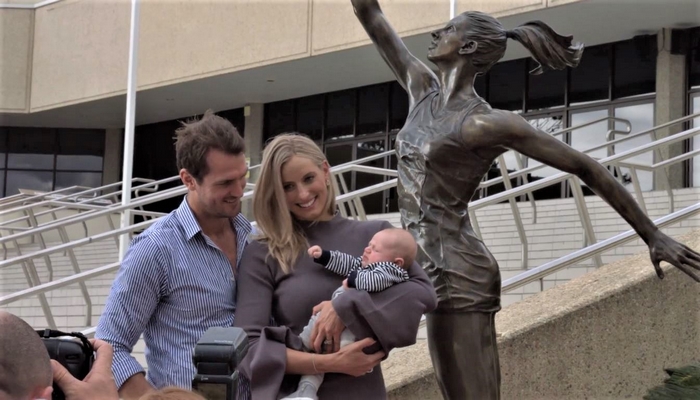 Unveiled at the Boondall Entertainment Centre (BEC) in May 2017, the bronze statue of former Queensland Firebirds team captain and netball champion Laura Geitz is the first statue to be built in recognition of QLD women in sport.

“The statue was initially unveiled at BEC, the site of the Firebirds’ sensational 2015 grand final win, however it’s wonderful to see that the state’s first netball statue now takes pride of place at the home of netball, to inspire athletes and fans every time they visit.

“This statue recognises the outstanding achievements of Queensland’s female athletes, and I hope that our young netballers will see the statue as a symbol of inspiration to follow the footsteps of people like Laura,” he said.

Jointly funded by the Queensland Government through Stadiums Queensland and AEG Ogden, the statue was created by sculptor Liam Hardy. Netball Queensland CEO Catherine Clark said that it will serve as a reminder of the successes of the Firebirds.

“The QSNC is a symbolic home for the 300,000 strong netball community across Queensland, supporting not only our champion team, but also the next generation of junior netballers,” Ms Clark said

“Laura is an absolute inspiration, and it’s wonderful to have her likeness on display as a reminder of what we can all strive to achieve,” she said.

Laura Geitz led the Firebirds to three national championships as well as the Australian team to gold at the 2014 Commonwealth Games. She announced her retirement in 2018, ending her successful career with two Player of the Year awards and a total of  169 national league games played.