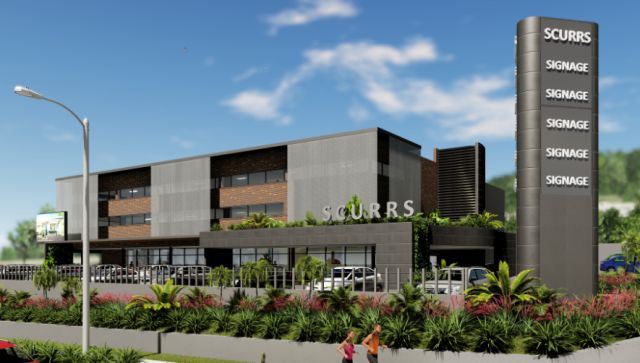 The plan to breathe new life into the iconic Scurr Bros’ site at 1437 Logan Rd in Mount Gravatt will soon become a reality.

Owner Pigozzo Group recently unveiled the new designs of ‘Scurrs,’ a  health and wellness hub featuring the same building and its bricks, with a grey and black exterior.

As a way of honouring the family behind the site, the group opted to keep the structure and its carpark rather than have them demolished. The Scurr Bros’ site has already become one of the landmarks in Mt Gravatt, so Pigozzo also decided to retain its name.

In addition to a health and wellness hub, the centre will be home to new retail outlets, a gym, childcare centre and medical-focused businesses.

Pigozzo’s development application was approved by the Brisbane City Council in 2011. Whilst they already have all the permits for operational works, they still do not have the approval for the 30-metre telecommunications tower.

David Seeney, project manager of the Pigozzo Group, said the height of the tower was not something they had control over since it was only dictated by current and future development in the area.

Pigozzo Group said the construction would likely start in September this year.

Scurr Bros’ Site Through the Years

The site was originally a Queenslander home built by William Scurr in 1913. Fifteen years later, his brother Edward built a blacksmith shop on the site.

The business later became a family affair, with their two other brothers Thomas and Jack joining in. They made horseshoes, ploughs, harrows, and scarifiers.

When cars took over in 1934, the family turned the blacksmith shop into a motor body building shop. It became a hardware store in 1954, like what many people today can remember.

Over three generations of the family worked in the business, until the Scurr Bros decided to sell it in 1995 to Woodmans Hardware.